History of Innovations in Medical Physics

A look at the history of Medical Physics, highlighting discoveries that have paved the way for innovation.

In honor of last week’s International Day of Medical Physics, we’re highlighting discoveries in physics that have paved the way for innovation in the field of medicine. This pioneering work has resulted in medical breakthroughs and the dawning of the field of medical physics. 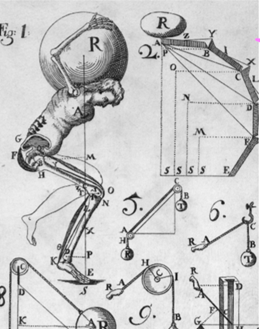 Mechanics of the Spine by Giovanni Borelli, via Physicsmedica

The term Iatrophysics, meaning “physics applied to medicine,” was the original term for medical physics and referred mostly to the mechanical nature of the human body. Giovanni Borelli, a physicist dedicated to this topic, applied mathematics and physics to physiology and described the motion of the body using basic physics–contraction, center of mass, expansion, weight, and gravity–and analogies such as pulleys and scales in his book, which was published shortly after his death in 1679. (2) Today, his description of body mechanics are now known to be incorrect, but he was one of the first players in what would become known as medical physics.

The father of medical physics is arguably Jean-Noel Hallé. As a professor of medical physics at the School of Health in Paris in the late 18th century, his teachings focused on musculo-skeletal movement, which could in-part be described by physics. Hallé was the first to teach anything related to the use of physics in medicine and carried out investigations on breast cancer. (2)

The modern era of medical physics began in 1895 in Willhelm Roentgen’s laboratory. While working with a cathode ray tube, Roentgen noticed he could see a screen glow some feet away even after shielding the tube with cardboard. He knew this was not the effect of the cathode rays he was researching and called these new rays, “x-rays.” Roentgen took an x-ray image of his wife’s hand, the first x-ray image and what is probably the most recognizable x-ray in history. Roentgen circulated the image to colleagues, and the medical uses for “x”-rays became apparent. (3)

X-Ray Image of the Hand of Roentgen’s Wife, via NCBI

After the x-ray, there was a whirlwind of innovations and discoveries that would eventually, if not immediately, have medical use. The 1890s were an important year for medical physics. The first radiograph was taken on a battlefield. The first attempt at using x-rays for therapy was completed, and while this attempt to treat a stomach cancer failed, the failure did not inhibit future treatment efforts, which continued to rise in number.

Radioactivity was also discovered by Henri Becquerel. Both of these men would go on to win the Nobel Prize in physics for their landmark discoveries, with Roentgen the first ever to be awarded the prize in 1901. (3)

These discoveries saw medical applications as early as 1901, when Becquerel reported being burned by a radioactive isotope, a result that led to the use of brachytherapy as a method of treating skin lesions. Once it was realized these new discoveries could inflict harm, the Roentgen Society was founded (now known as the British Institute of Radiology). They began cataloging injuries.

Clarence Dally assisted Edison in creating x-ray tubes and intensifying screens, and as a result of the unknown effects of the x-rays Dally developed cancer, which led to his death. His death became the first recorded one attributed to x-rays, with some calling him an “x-ray martyr.” (3)

Discovery Application and the Rise of Hospital Physicists

Physicists were not yet commonly employed by hospitals until the 1930s when the number grew from 12 to about 40 in the UK, and continued rising as the applications of scientific discoveries increased. Such applications included: 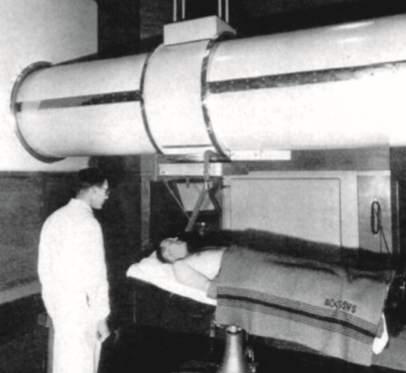 One of the First MV Therapy Units, via NBCI

Technological advancements came as a result of World War II and were readily adapted for medical use. For example:

The 1960s saw an explosion in medical imaging, including the creation of the gamma camera by Hal Anger, PET imaging, the use of x-ray CT in 1973 by Godfrey Hounsfield, and the development of MRI.

Over the past 25 years, the computer technology revolution has led to huge improvements in the quality of images and patient treatment. Continued innovation over the last decade has resulted in landmark improvements in radiation therapy such as adaptive therapy through imaging, use of MRI in conjunction with treatment, and use of automation and AI in therapy planning.